Investing in People through automation

by Esteban Garcia and Jonathan Sussman

“Businesses all around the world strive to automate operations with hopes of saving money but automation isn’t always easy or cheap. Some tasks are ideal for automation and investing in making that happen is a no-brainer. This isn’t always the case though. Automation makes sense only under certain circumstances. We can determine when it makes sense by breaking down the costs and benefits, assigning each component a score based on some guidelines detailed below. After that we can aggregate the score and know what the best course of action is.

Scoring can be broken down into two categories: costs and benefits. The score for costs is determined by a rubric with each criteria having 15 points each for a combined total of 60 points. The score for benefits is determined with a questionnaire-like scoring system of four aspects being rated from one to ten. The scores from both costs and benefits are combined to determine the final score; which is just a simple 100% grading scale with an A being a score between 80 and 100, a B being 60 though 79 and finally, a C score being 59, and lower.

B – Re-evaluate in the future

The higher the score the more it makes sense to automate. Tasks with scores 80 and above should be automated immediately, scores between 80-90 may not make sense to automate immediately but could in the future be good candidates and scores lower than that aren’t worth the time.

There are many factors that factor the cost of automating a process. Mainly, the cost for building the system that performs the automation tasks, the complexity of the system, how reliably it operates, and how much it would cost to make changes/updates to the system.

Based on these factors the following criteria should be considered: 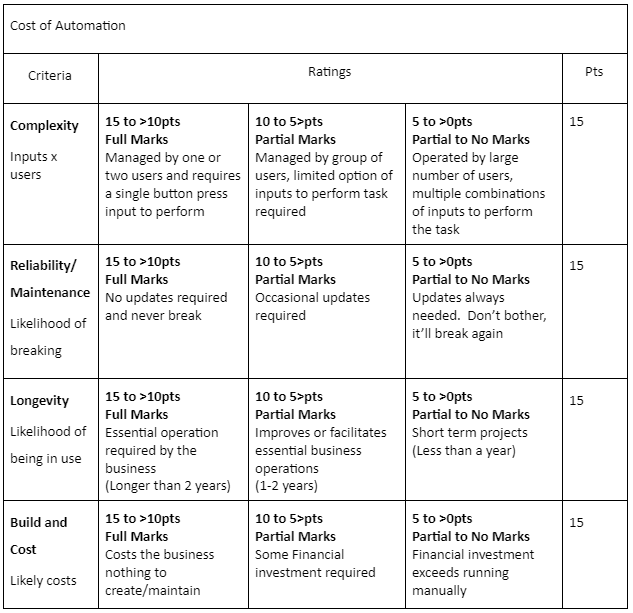 The benefits of automation almost always seem obvious and one would think that the more automation the better, but the reality is not so simple. Just as automation brings benefits to the table it can also bring pitfalls. A company should do its best to avoid pitfalls that would end up costing the business more money than had it kept doing the task manually.

This may come as a surprise but the value in automation doesn’t just come in the form of dollars and cents.  Automation can bring major benefits to your work force.  By eliminating tedious, repetitive tasks you can greatly increase the quality of life for your employees and free their time to work on things that are more impactful and ultimately more satisfying to work on. The following questionnaire helps determine how much of an impact automation has on company’s workforce business: 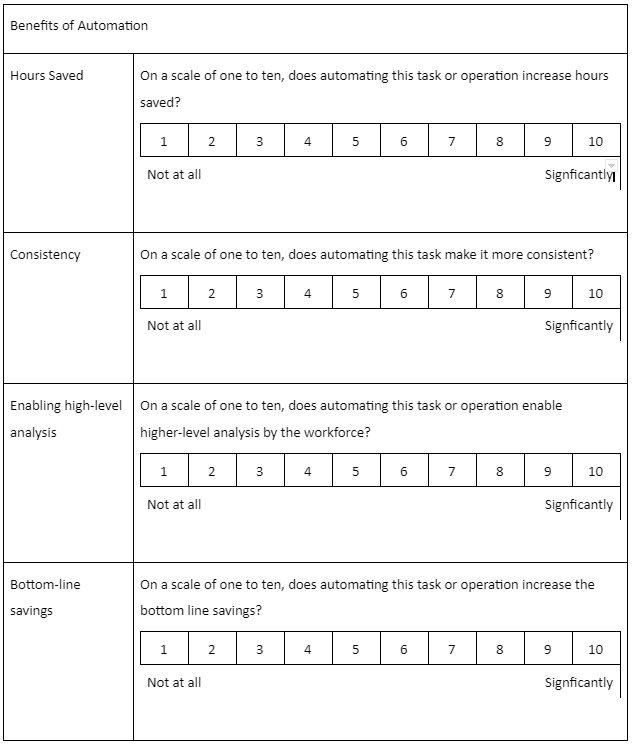 The following examples demonstrate how the scoring should be performed and which sort of task is ideal for automation, a potential future candidate and which tasks not to even bother with. These examples are based on real projects that SCS Analytics has worked on.

Compiling information into one location is always tedious to do manually. Often this needs to be done when receiving information that is categorically the same but comes from different sources.  This could be sales data from different customers, inventory from different suppliers ect.  In this case a client was trying to understand how best to balance their network to be able to satisfy their distributors demand as soon as possible.  The problem was that most of the distributors used their own inventory management systems, none of which had the ability to communicate with any of the clients system.  Instead they would each send a data extract from their respective systems via email to a central inbox. An employee would then open each file, extract the data, transform it, and finally paste the data into an excel report. This was done daily with 20+ separate files.  We can assign this process a score using the previously described criteria and determine if its worth investing in automating.

Scraping emails for files is an easy and reliable to do.  Emails came in a standard format that didn’t change and the number of emails didn’t change on a daily basis.  The data from each distributor always came in the same format.  With the data inputs being consistent and collected into a centralized location (central inbox) the extraction/transformation process built has a very low likely hood of needing to be changed with modifications only being needed if some data changes formatting.

Longevity
With no plans for distributors to make their inventory management systems communicate with the clients system planned it seem that this process would run for the foreseeable future.

Since the output was an excel file and the client had no existing data warehouse solutions we proposed an excel macro solution.  With this solution no investment is needed to build or maintain a database and no additional licenses are needed.  Going with this solution allows us to keep build costs low and thus its relative score high.

The process would change from taking a couple hours a day to simply requiring the press of a button. Reducing the time required by almost 100%

Repetitive tasks are prone to human error but are perfect for being done programmatically.  Automating this task eliminates any human error.

Since the proposed solution is to keep everything in excel there are no additional benefits in the scope of high-level analysis.  If this collected data was being then stored in a data base some historical analysis could be done but as it stands the solution doesn’t enable any high-level analysis.

The score for the cost of automation was a 58 and the score for the benefits of automation was a 30. Making the combined final score of 88. A more sophisticated solution could have been proposed.  Storing the data in a data warehouse instead of just in an excel would give you historic views of inventory.  This would open the door to a plethora of different types of analysis included historical and exception based reporting.  While this would bump the Enabling high-level analysis score up it would also significantly increase the build costs/lower its score.  One thing to consider is that some solutions can make a task viable to automate while others do not.  This needs to be at the forefront of your mind when deciding to automate  With the proposed solution this task falls firmly in the A range and there shouldn’t be a second thought to automate it.

Stop-gap Automation, automating a task that will soon be replaced by an automated system. Another scenario was developing an automation system for recommending optimal shipping routes.  However, at the time new 3rd party software was being integrated into the existing planning system that had this capability.  The 3rd party software was in the testing phase and was expected to be rolled out within the next 6 months.

Shipping optimization is a complicated problem that requires a lot of accurate data to produce accurate results.  On hand inventory, forecasts, transit times and more need to be considered.  Calculations are complex and can take significant computing power limiting the amount of tools that can be used to satisfy the requirements. Methodology exists to solve this problem.  Most of the complexity comes from ensuring data integrity.

Since changing any of the inputs can dramatically change the outcomes reliability is dependent constant maintenance.  For example if a new carrier is added that decreases the transit time of a shipping route that needs to be reflected in the analysis.  To automate all the settings would require significant infrastructure and testing. Until the process is 100% ironed out this process would require constant oversight.

Longevity
With an existing solution already in the works its likely that any solution created now would no longer be needed 6 months from now.

Building a solution that automatically produces an optimized shipping route is not something that can be rolled out overnight. Much thought, planning, development, and testing goes into a solution of this size.

Multiple people work on optimizing shipping every week.  This would say dozens of hours.

This is a very difficult problem to solve by hand.  An automated systemic will consistently provide a much better solution than doing anything manually and will produce those results week in and week out.

Automating this allows you to perform a multitude of analysis by tweaking input paraments.  A slew of what-if analysis could be done quickly.  Seeing how transit times, inventory targets affected shipping would be trivial and allow could be used to guide future network changes.

Bottom-line savings
The long-term savings are potentially huge.  Not only savings from labor but also from network optimizations made possible by the higher-level analysis.

Adding up both scores results in a 65 or a B. This task offers many benefits but being that it will be replaced very soon makes it financially costly and not very profitable. Yet if the task could have a longer lifespan such as a year or more that would increase the Longevity score. Overall increasing the potential final score to an A score. This demonstrates that a final score of a task is not set in stone but rather depends on the given situation.  Automating this task would be worth reviewing again in the future.  If the 3rd party software that was being tested doesn’t end up getting implemented this would become very worthy of automation.

Anything that is both either too complicated to automate, too expensive to automate, unreliable, and shortly lived will most likely score in the C score range. These automations are not worth the time and effort to produce.

So considering the previous example, the candidate could have easily scored in the C range if one or two categories were different. If it had been too complicated to automate or too unreliable once automated then this would have dropped the score to a C candidate.

Deciding whether to automate something is ultimately a balancing act.  By breaking down a task into its components it becomes much easier to really understand what kind of challenges you might face and what an optimal solution can look like.  A task that will no longer be needed in a couple months may at a glance not make any sense to automate. However, if it can be done quickly, easily and cheaply you may find going through with the automation will ultimately save a lot of money.  Scoping out a solution using the criteria discussed will help guide you to the best possible solution and decide if it makes sense to move forward in implementing it.

Esteban is an industry up-and-comer with experience in apparel, retail, and international supply chains. Joining SCS Analytics in 2021 with the objective of strengthening the company’s analysis performance and online web presence. Esteban believes that a company can improve its profits by improving the S&OP process within a company and through the use of artificial intelligence. Hence such solutions significantly improve the client’s business and profitably.

Jonathan is a seasoned supply chain professional with experience in CPG, apparel, retail, government, and telecom.  He founded SCS Analytics in 2011 with the objective of creating solutions tightly interwoven with operational processes.  Jonathan believes that the gap between high-level process and operational execution drives huge inefficiencies.  By designing solutions that bridge this gap Jonathan has been able to drive significant improvements in his clients’ businesses time and again.