The Age of Autonomous Trucks

S&OP and Crossing Horizons: The Age of Autonomous Trucks

by Esteban García and Jonathan Sussman

Electric cars are currently making headlines but Autonomous Trucks are about to change the supply chain landscape. With the development of autonomous technologies, logistics companies will have to adapt in order to survive the disruptive changes that autonomous vehicles bring. Improved safety, fuel efficiency, reduced cost, and sustainability will make them especially valuable to fleet owners while at the same time bringing fear to smaller logistic companies that are unable to afford them. The future is here and autonomic trucks are leading the way!

The Autonomous Impact on Logistics 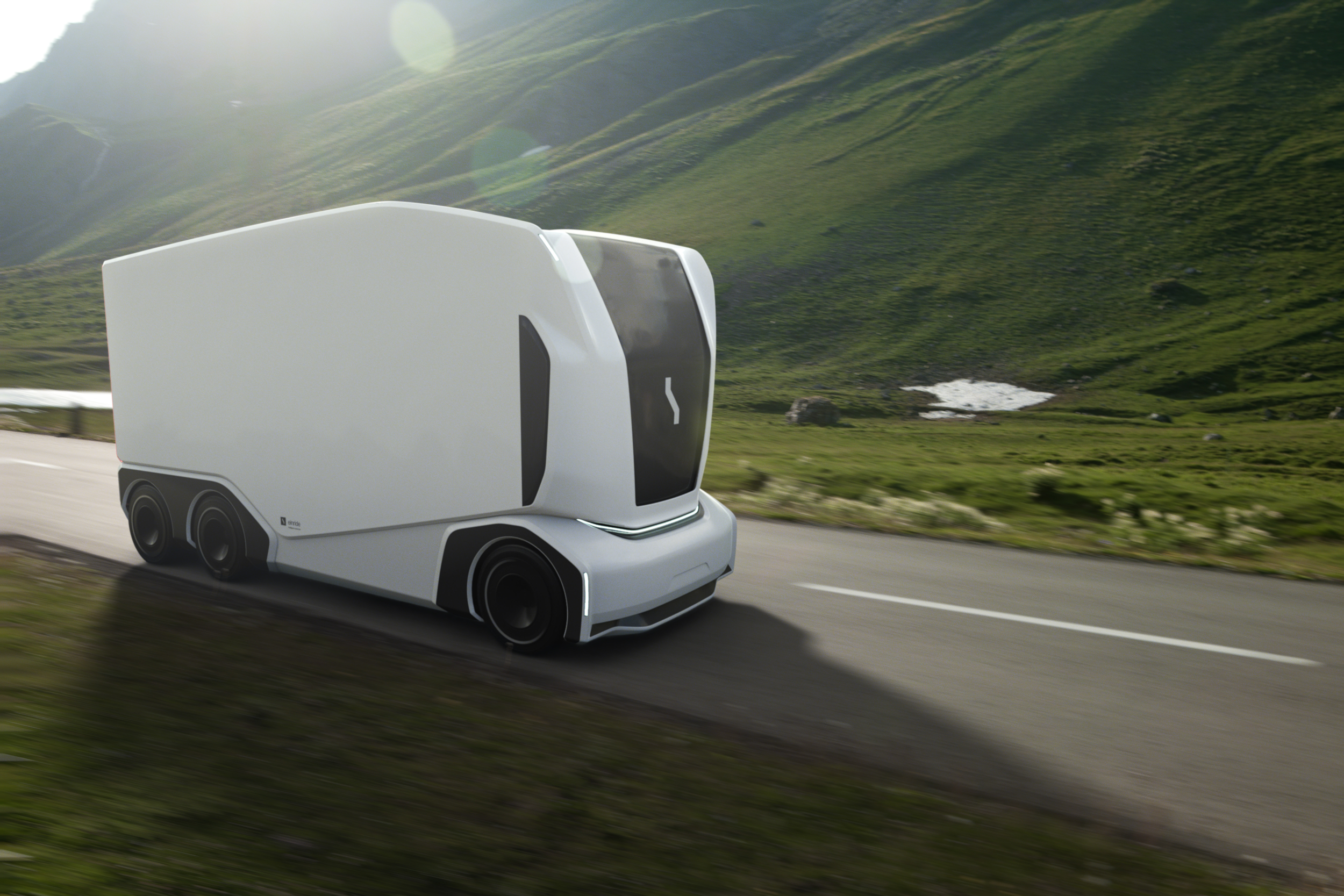 In essence, autonomous technology seeks to simplify driving, increasing efficiency, all while improving record-keeping from one depot to the next. These changes, along with the ultimate goal being that drivers will no longer have to perform redundant driving tasks will change the way trucks are driven. Gone will be the days of constantly watching the road for many long hours. As autonomous technology evolves it will be able to monitor the road and drive the truck and it is currently believed that this will happen in four waves each with improving technology. Essentially the driver will simply monitor the truck drive itself as it goes about from point A to B; with the driver only becoming involved when necessary. In addition, autonomous trucks could also be controlled remotely from the trucking company’s command post. All these changes simplify trucking and turn the driver essentially into the truck’s supervisor. 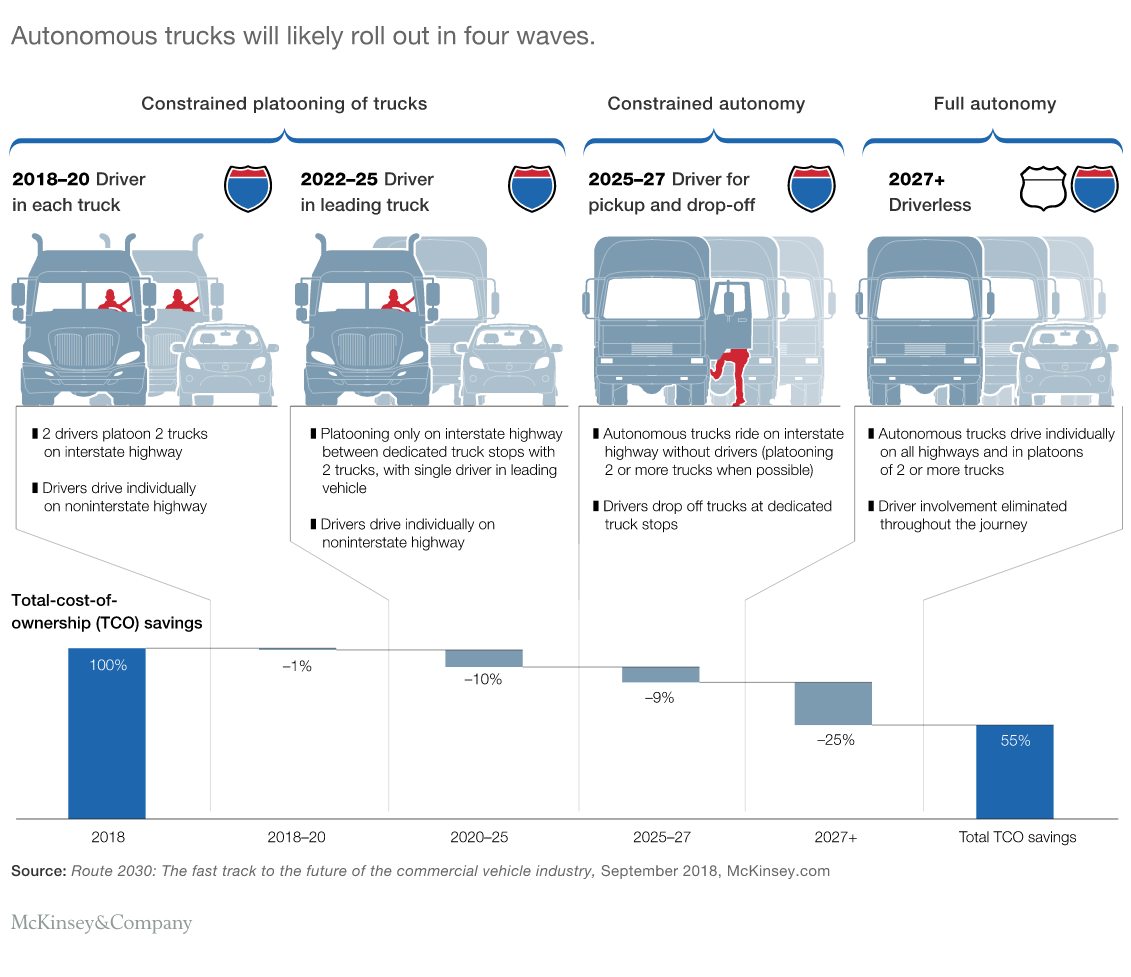 For the changes mentioned above to happen the logistic industry will have to shift from human to physical and intellectual resources in order to run and operate and manage fleets of autonomous trucks. Logistics companies will need workers trained in IT systems and programming. Plus companies will also need to invest in new technology and all the supporting infrastructure to operate such technology. This will result in a significant cut down in labor being that one truck driver can supervise several trucks from the convenience of his office computer.

Greater emphasis will be placed on employees being highly educated and trained in order to perform daily operations. As a bonus, this will also solve the shortage of truck drivers across America since fewer drivers will now be required to operate the fleet of autonomous trucks.

Further investments in autonomous technology will reduce operational costs. Currently, the biggest expenses for third-party logistics companies are associated with driver and fuel costs, which can be significantly reduced by implementing autonomous technology. This will reduce mandatory resting time, trucks will be utilized more optimally, and overall generating cost savings. Apart from these improvements, autonomous trucks are safer than traditional trucks resulting in cutting back on money spent on road accidents. Morgan Stanely estimates that this would save the logistics industry $168 billion annually.2

The long-term implications for the logistics industry are several. One will be that autonomous technology will make logistics companies more powerful and finally able to control deliveries from door-to-door. This means that goods will be transported by a single company rather than goods being handed off from one logistics company to another before reaching their final destination. As a result, this will force large logistic companies into a position where they will have to directly compete with each other in order to determine who controls the door-to-door delivery. There is a great possibility that smaller companies that perform last-mile operations will be absorbed by larger third-party logistic companies and causing further segmentation as logistics operations either become long-term haul or last-mile deliveries.

The segmentation and potentially restructuring of the logistic industry between long-term hauls and last-mile deliveries will also lead to the automation of loading and unloading goods. More specifically, the loading and unloading of long-haul trucks at terminals will become a reality. Currently, loading and trans-shipment operations provide the largest constraints due to the lack of a standardized format or unitization of consignments. This will most likely lead to a centralization of logistics operations. Where long haulers take their convoys from depot to centralized hubs. After which last-mile service providers deliver the items to the consumer. Larger companies will be able to adapt to these changes and develop operations that consume the whole door-to-door service, while smaller companies will only be able to lease smaller fleets of autonomous trucks.

Autonomous vehicles will transform the logistics industry saving billions of dollars and greatly simplifying the shipping component of supply chain management. The development and arrival of autonomous technology will greatly impact how logistic companies deliver goods to consumers. The entire industry will most likely change as platooning services and last-mile providers become dominant components of delivery. These features aim to lower cost and overall keep the logistics portion of the supply chain management a process that is easier and less complicated to manage as compared to before the introduction of autonomous trucking.

Esteban is an industry up-and-comer with experience in apparel, retail, and international supply chains. Joining SCS Analytics in 2021 with the objective of strengthening the company’s analysis performance and online web presence. Esteban believes that a company can improve its profits by improving the S&OP process within a company and through the use of artificial intelligence. Hence such solutions significantly improve the client’s business and profitably.

Jonathan is a seasoned supply chain professional with experience in CPG, apparel, retail, government, and telecom.  He founded SCS Analytics in 2011 with the objective of creating solutions tightly interwoven with operational processes.  Jonathan believes that the gap between high-level process and operational execution drives huge inefficiencies.  By designing solutions that bridge this gap Jonathan has been able to drive significant improvements in his clients’ businesses time and again.